With the rapid development of 3G network technology and the enhancement of various functions of 3G mobile phones, it has become possible to use 3G mobile phones to realize video surveillance anytime and anywhere. Embedded technology, as a popular technology in today's IT industry, various embedded chips such as DSP, ARM, SOC, etc. are widely used in digital, security, traffic signal acquisition, telemedicine and other fields, can predict the future of portable multi-functional personal medical Digital service terminals will be as popular as mobile phones, and users can transmit their important physiological information to remote medical centers or home care experts in real time, accurately, and quickly anytime, anywhere, so as to obtain professional advice and guidance from doctors to achieve remote medical monitoring. Applications. This paper designs a 3G mobile phone embedded video acquisition system based on ARM9 chip. Compared with the general video acquisition system, this system has the characteristics of small size, low energy consumption, convenient update and maintenance, and low development difficulty.

The hardware platform of this system is shown in Figure 1. In view of the reliability, scalability and maintainability of the system, this system adopts a modular design principle. The hardware of the video acquisition system of the entire system is composed of 3 parts. 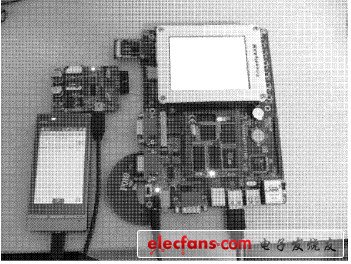 Although SDRAM can't save data when power off, it has very high read and write speed, so it is suitable for the main program. This system uses two 32 MB HY57V561620 chip cascades to form a 64 MB SDRAM memory. The internal storage structure of the chip is 4 Banks & TImes; 4M & TImes; 16 b, a total of 4 banks. The NAND FLASH storage system uses the K9F1208U0M chip from Samsung with a storage capacity of 64M & TImes; 8b. The interface connection between the core module and the peripheral control module is realized by the bus interface.

The module uses the CMOS camera interface of the Micro2440 development board, and directly uses the CAM130 camera module provided by the friendly arm. The module is composed of a 1.3-megapixel CMOS image sensor OV9650 and its interface circuit and power circuit. CMOS sensor is selected because it has the advantages of high integration, small size, low power consumption, convenient programming, easy control, low cost, etc., and this type of sensor is developing in the direction of low noise and high sensitivity, so CMOS sensor is the current The best choice for low-pixel image acquisition systems. The interface circuit performs A / D conversion and processing on the image signal and transmits it to the CAM IF of the processor.

The module is composed of LCD and touch screen interface circuit, JTA G debug interface circuit, U SB master-slave port circuit, reset circuit, power circuit, RS 232 serial port circuit, etc. The LCD and touch screen interface circuit is used to display the video data collected after the application program is written and to accept the user's external control commands. The JAT G debugging interface provides the function of hardware debugging. It follows the IEEE 11491 standard and uses boundary scan technology to realize the observation and control of the chip input and output signals through the boundary scan chain. An important function of JATG in this system is to burn the boot loader Boot loader into the development board for further kernel loading. The USB main port is used for external U disk, mobile hard disk, mouse and other devices that support U SB bus interface, which can expand the storage space.

The USB slave port is used to program the WinCE kernel file to the system and the communication between the system and the PC. The reset circuit uses a special reset chip MAX811 that has both power monitoring and data protection and a watchdog function to ensure that the system can be reliably reset when an abnormality occurs. RS 232 is used to view the boot loader program startup status and extended serial communication function through Hyper Terminal or DNW tool. The power supply circuit here provides 5 V (providing external power for the entire system), 3.3 V (core module, peripheral control, image acquisition module power supply) and 1.3 V (core module power supply).

For Iphone:
For Iphone8/X/XR/XS Max

For Others:
For YotaPhone 2, For Elephone P9000