The wireless sensor network is composed of a large number of sensor nodes with small size, limited power supply resources, and configured with certain computing power and wireless communication capabilities. For the sensor network system, there must be a need for program code update and maintenance, but due to the distributed deployment characteristics of the sensor nodes, the program upgrade of the network remote node becomes extremely difficult. To this end, over the air (OTA) provides an effective means of updating. This paper first introduces the OTA system based on ZigBee protocol and verifies it on the CC2530F256 hardware platform. Finally, in the Z-Stack protocol stack, an OTA update method for mirror page request is designed, and through experimental test, it is compared with the original mirror block request method. The experimental results show that the mirror page request method can greatly reduce the network update traffic, thus improving the node update efficiency.

In recent years, due to the decline in hardware costs and advances in manufacturing processes, wireless sensor network technology has gradually achieved large-scale commercial applications, such as medical monitoring, smart grid and smart home [1]. For any embedded computer system, there is a need for program code upgrades. In the application environment of the wireless sensor network, due to the scattered deployment of a large number of nodes, the recovery of the nodes becomes extremely difficult, and the program updating method of the traditional physical connection is no longer applicable. An effective solution to this is OTA technology.

The over-the-air technology originated from the mobile phone network and can remotely manage and update the SIM card data through a mobile communication network (such as GSM) [2]. Drawing on mobile communication networks, over-the-air technology can also be applied to wireless sensor networks. Unlike the routing protocol [3] at the network layer, the code distribution protocol [4] is the core technology that supports OTA. The former is concerned with how to quickly and efficiently transfer data information in the network, the latter is concerned with how to pass the update code to each node intact [5]. At present, mature code distribution protocols have been proposed, such as Xnp [6] and Deluge [7] based on TInyOS system. The former proposes a single-hop network update scheme, and the latter supports multi-hop network update function, but both need to be specific. Hardware platform support.

This paper transplants and verifies an over-the-air technology based on the ZigBee protocol [8]. Its distribution protocol supports the point-to-multiple transmission update function. The code distribution function of the multi-hop network is supported by the routing protocol. Under the Z-Stack protocol stack [9], only the mirror block request function is supported, and the update efficiency is not ideal. In response to this problem, an efficient mirror page request function is designed to improve the efficiency of point-to-multiple transmission updates and reduce network traffic.

The ZigBee protocol specification uses the physical layer (PHY) and media medium access layer (MAC) defined by IEEE 802.15.4, and defines the network layer (NWK) application layer (APL). In response to the demand for wireless sensor network reprogramming technology, the ZigBee Alliance proposed an OTA specification [10] as a system optional module in the framework of the original protocol.

Figure 1 is a schematic diagram of the structure of the OTA system. The whole system is mainly composed of three parts: an OTA application console, an OTA server, and an OTA client. The OTA application console is the host computer management software, responsible for OTA image management, network node information display and sending update commands; the OTA server is responsible for wirelessly transmitting the upgrade image to the remote node, and connecting with the host computer through the serial port to report to the application console. Node update progress information, etc.; OTA client refers to the node to be upgraded in the remote network. 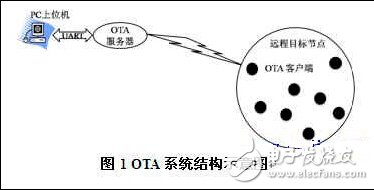 According to the update scope of the code, it is divided into overall code update and difference-based update [11]. The former is to package all executable binary code into an image and distribute it to the node. The latter generates an edit script by comparing the differences between the old and new image files, and then distributes the script to nodes in the network for differential update. Undoubtedly, the former needs to transmit a large amount of data, generally in the order of kilobytes, which increases the network load, but the code update operation is relatively simple; the latter sends less data, but increases the complexity of the update process. , a greater burden on the processor, resulting in greater energy consumption. Since the ZigBee protocol has strict requirements on the low power consumption standard of the network node, the OTA code distribution protocol adopts the former image transmission mode. 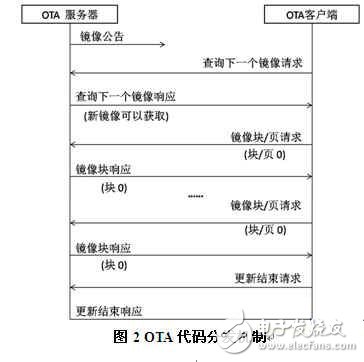 The data interaction process between the server and the client is shown in Figure 2. First, the OTA server sends an image advertisement (Image Notify) to the OTA client (node) by unicast or broadcast, indicating that the new image is ready. After receiving the image prompt information, the node sends a query to the OTA server for the next image request (Query Next Image Request), and the request information includes the version information of the currently running firmware. Upon receiving the request, the OTA server responds (Query Next Image Response). Subsequently, the OTA client and the OTA server complete the entire image transmission process through a secondary handshake mechanism, an image block request (Image Block Request), and an image block response (Image Block Response). After the OTA client receives the mirror block data, the block data is written to the second storage area (the image currently running by the client is saved in the first storage area). After the download is complete, the node will perform a CRC check on the downloaded image. Finally, when the node needs to be updated, the new image is copied from the second storage area to the first storage area, and the new firmware starts running, completing the entire upgrade process.