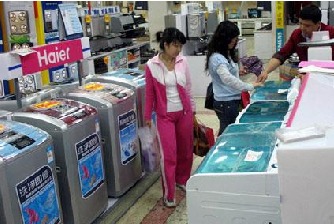 Under the influence of the energy-saving subsidy policy, the trend of China's color TV's warming in March this year continues to heat up.

However, the reporter of the â€œChina Sankei Shimbunâ€ learned that although the TV industry was warmed by the energy-saving subsidy policy, the economic winter did not end there. As China's first color TV industry to enter the international market, there has been a dangerous decline in the signal.

"The overall decline in color TV exports is partly due to the lack of demand caused by the sluggish external economy. In addition, China's color TV industry is also facing the problem of cost advantages that are no longer so obvious. Coupled with unfavorable factors such as the appreciation of the renminbi, the export enthusiasm of domestic color TV manufacturers has declined." Wu Chaoguo, a researcher in the home appliance industry of China Business Intelligence Industry Research Institute, said in an interview with a reporter from the China Sankei Shimbun News.

The data of the General Administration of Customs did not surprise the TV market. China is the world's largest home appliance producer and exporter, but its core technology for color TVs has been monopolized by foreign TV giants. Therefore, Chinese companies do not have the right to speak in the color TV field.

In addition to the core technology being monopolized by foreign countries, the reporter also learned from interviews that Chinaâ€™s color TV manufacturers have to spend a fortune on patents each year, which adds a lot of costs to the company. In the future, how to establish an effective mechanism to avoid unnecessary patent fees is an urgent problem for enterprises.

Qiu Shaomei, a research fellow at China Institute of Technology, also told reporters, â€œAt present, Chinaâ€™s color TV exports face two major new issues. First, external markets are fiercely competitive and consumer demand is weak. In addition, the cost pressures of domestic manufacturers have increased, including manufacturing cost logistics, The rapid increase in land and labor, including the increase in R&D and management costs of enterprises, has further weakened the competitiveness of enterprises, which can be said to be internal and external problems."

It is reported that since the fourth quarter of 2012, China's household electrical appliance industry has been relying on exports of enterprises in the face of raw material price fluctuations, exchange rate instability and other factors, resulting in a significant decline in color TV export growth. It is worth mentioning here that in 2012, out of all household appliances, only TV exporters encountered Waterloo.

Qiu Shaomei told reporters that this is related to the color TV itself. The CRT has already been eliminated. The development of emerging markets is also affected by the economic situation. The year-on-year decline is not surprising. The application of plasma in the home TV industry is also increasingly deviating from the mainstream. There are few manufacturers of plasma TVs and their base number is very small.

At present, the color TV industry is experiencing a cold spell in exports, which may reflect the fact that "China-made" color TV products do not require technology upgrades. In view of the current severe export situation in the color TV industry, Wu Chaoguo believes that in the long run, it is necessary to eliminate the chronic diseases in the industry and master the core technologies and patented technologies. This is a long-term solution to the domestic market and the international market.